Thank you to all those who have stuck through my series of posts explaining my take of guitar fretboard logic. We started with using octave shapes to help in quickly identify the note at any point on the fretboard. We then discussed the idea of major triad chord shapes that interlock to cover the entire fretboard. We then expanded from the major triad chords to minor triads and seventh chords. In this post we go from seventh chords to chords of more extended harmony, specifically the 9th chords.

The unaltered ninth interval is really the same as the second note in the scale, only an octave higher. For our purposes, they are enharmonically the same. To really sound a ninth chord color, you should include the seventh note. Otherwise it could imply more of a suspend 2 chord (a later post). The most common type of ninth chord is the dominant ninth chord. When someone says a C9th, they mean a C dominant 9th chord. It’s pretty much a cliche to call it “The Funk Chord” but it’s certainly a signifier of the funk guitar sound. You’ll also hear it used in T Bone Walker style blues.

I have found that the best way to learn the location of the 9th is to visualize it’s relationship to the notes in the triad chord form shapes. The 9th is two frets higher (a whole step in scale terms) than the chord’s root note and two frets lower (a whole step again) than the chord’s major third or one fret lower than the flatted third interval in a minor chord.
The most common chord shape for a 9th chord can be derived from the major triad chord shape with the root on the fifth string (diagram 1A): 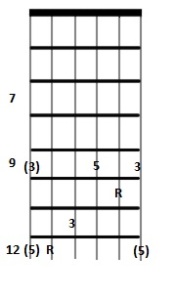 Using a the A major chord with the root played on the fifth string, 12th fret as an example, you could get the flatted 7th by replacing the chord’s fifth on the G (3rd) string with the flatted 7th which is 3 frets higher (diagram 1B). Due to the nature of the guitar fretboard, it’s sometimes necessary to not include every note that technically should be played. If the chord does not have an altered fifth interval (#5 of b5), then the chord’s fifth is usually dispensable. 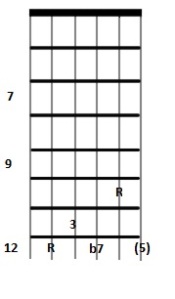 Finally, you can then add the 9th to the chord by replacing the root note on the B string with the 9th two frets higher (diagram 1C): 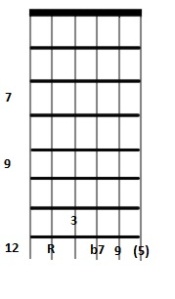 As I said earlier, the best way to familiarize yourself with the 9th is to go over the five chord shapes and identify the interval relative to the chord’s root and third.

Let’s look at a minor ninth chord. Using the A minor chord with the root on the sixth string as a starting point (diagram 2A), you can add the flatted seventh by lowering the chord’s fourth string root note by two frets, giving the flatted seventh, and adding the ninth by replacing the root on the first string with the ninth two frets higher (diagram 2B) 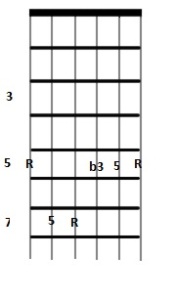 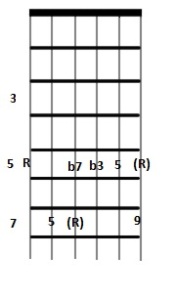 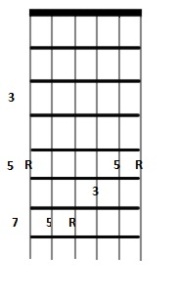 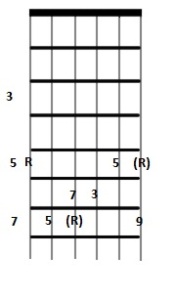 As I have said before (and I will keeping repeating till we’re all sick of it), experiment with this. Take a major triad chord shape and fool around with it. Identify where the major thirds are and lower them by a fret get the minor triad. Lower a root note by one fret to get the major seventh. Lower the root by two frets to get the flatted seventh. Raise the root by two frets to get the ninth. Your knowledge of the fretboard will improve dramatically.