Three Will Get You Four: Guitar Fretboard Logic Part IV

We are continuing our discussion of guitar fretboard harmony. In previous posts, I outlined how you can play a given major chord anywhere along the guitar neck. We then saw how you can convert the major chord into a minor chord by lowering the major third of the chord to a minor third. These chords are known as triads because they are made of three notes: the chord’s root, third and fifth. If these terms are strange to you then let’s briefly discuss chord formula.

All this stuff about chord formula is fine and dandy but how does this relate to the chord shapes that we have talked about? You can add the 7th note to the chord but due to the layout of the fretboard, making a triad chord shape into a seventh chord is usually a matter of identifying the root note in the shape and lowering it either by one or two frets (depending on type of seventh chord you’re going for). As an example, look at Diagrams 1A and 1B below: 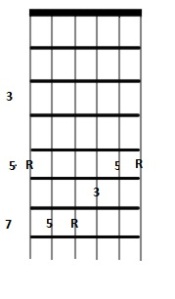 Diagram 1A is a A major triad with it’s root on the sixth string. Diagram 1B is a A major 7 chord that was derived from the major triad in diagram 1A. Notice that you can get the major 7th of the chord by lowering the root note on the fifth string one fret or by lowering the root on the first string by one fret (you can also modify the root on the sixth string but it sounds muddy and the tone color imparted by the major 7th will be rather indistinct). I showed the chord’s fifth (on the fifth string) in parenthesis because it’s usually not played when using this “grip”. The root notes on the first and fourth strings are in parenthesis for reference.

Diagrams 2A and 2B show the difference between the A major triad with it’s root on the sixth string and a A7th chord. 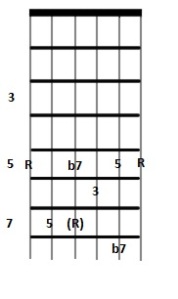 Dominant 7th chords are referred to as 7th chords. When your lead sheet says C7, they mean C dominant 7. The easiest way to get the dominant 7 chord is to lower a root note by two frets. That’s what being done in diagram 2B on the fourth string. You’re playing the flat 7th by lowering the root on the fourth string by two frets. You can also play the flat 7th one octave higher on the second string.

Minor 7th chords can be derived from the major triad shape by lowering the chord’s third by one fret and lowering a root note by two frets.

Here we lowered the major third on the third string by one fret, thereby making the chord minor, and got the flat seventh by lowering the root note on the fourth string by two frets, making it a minor 7th chord. You also have the option of replacing the chord’s fifth (located on the second string) with the flatted seventh.

Please experiment with deriving major 7th, minor 7th and dominant 7th chord shapes from the other major chord forms that I talked about in previous posts. That’s the best way to internalize all this stuff. This way you will eventually be able to look at the guitar fretboard and be able to identify where is the fifth of a Eb minor 7th anywhere (6th string/6th fret, 5th string/first or 13th fret, 4th string/8th fret, 3rd string/3rd or 15th fret, 2nd string/11th fret and first string/6th fret).