Home › Country/Bluegrass › “That High Lonesome Sound” . . : A Very Quick Intro To The Dobro

“That High Lonesome Sound” . . : A Very Quick Intro To The Dobro

The dobro is a strange and (IMO) really cool instrument.  “Dobro” itself was originally a brand name of resonator guitar. A resonator is the hubcap looking apparatus that sits in the middle of the instrument and gives it its unique sound while essentially acting like a mechanical speaker, giving it volume and sustain. The term “dobro” is also used as a generic trademark for any wood-bodied, single-cone resonator guitar. The wooden body differentiates a dobro from a National Steel guitar which have, as the name implies, has a metal body. There are two types of Dobros: square-neck and round-neck. Round-necks, held like a guitar, are typically played in blues music. Square-necks, preferred by bluegrass players, have strings that are high off the fret board, are played on their backs with the strings facing up and most importantly, played horizontally with all notes “fretted” using a tonebar. The Dobro was introduced to the bluegrass line-up in the 1950s by Josh Graves of Flatt & Scruggs, who used the Scruggs banjo picking style on the Dobro, and that is still the way it is popularly picked. Bluegrass players typically tune their dobros to GBDGBD, although some Dobro players use alternate tunings. 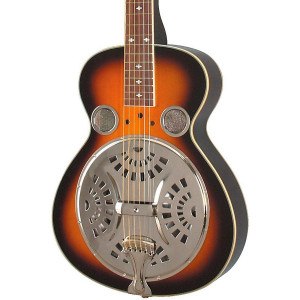 I had read about dobros in Guitar Player magazine (my bible back then) but the first time I saw anyone play one was when I saw the Earl Scruggs Revue play Wollman Skating Rink in Central Park, NYC. I thought it sounded so cool. In a way, both country and bluesey.

Josh Graves is credited with introducing the dobro) into bluegrass music shortly after joining Lester Flatt, Earl Scruggs and the Foggy Mountain Boys in 1955.

Below is a good introduction to Josh Graves and to bluegrass dobro in general.

Another important player of the dobro was Mike Auldridge , a founding member of the influential bluegrass group The Seldom Scene.

I’ve already mentioned Rob Ickes in a previous blog post (see https://roymusicusa.com/2017/07/13/he-took-my-twenty-dollar-bill-bluegrass-and-the-grateful-dead/) but he certainly is worth another look.

I have to say that my favorite is Jerry Douglas. He is a master of the bluegrass tradition but also pushes that tradition into more contemporary territory. He is probably best known as a member of Union Station, the bluegrass band associated with Alison Krauss but I first became familiar with him from the amazing CD he did with guitarist Russ Barenberg and bassist Edgar Meyer called Skip, Hop & Wobble.

Below are some other examples of how awesome the dobro can be. We have Jerry Douglas’ take on the Duane Allman guitar piece “Little Martha” as well as an early TV appearance with country music guitar legend Chet Atkins and future banjo legend Bela Fleck. Lastly, we have the Jerry Douglas Band playing an original tune “We Hide and Seek”.

By no means is this a comprehensive history/overview of the instrument. Just a starting point to check out a cool instrument and the cool music it can make.

One comment on ““That High Lonesome Sound” . . : A Very Quick Intro To The Dobro”