Home › Classic Rock › “Pictures From An Exhibition . . : The Instruments Of Rock & Roll At The Met Part I

“Pictures From An Exhibition . . : The Instruments Of Rock & Roll At The Met Part I

I recently went to the Metropolitan Museum of Art to see the exhibition “Play It Loud: Instruments of Rock & Roll” which is showing through October 1, 2019. This is guitar geek heaven. The show has on display approximately 130 instruments, many of them being the actual instruments used on iconic records or played live on stage. These are the actual tools that were used to make musical history. If a museum can display the typewriter used by Jack Kerouac or paint brushes used by Edward Hopper then surely the acoustic guitar used to write and record Stairway To Heaven is worthy of similar veneration. So for the next bunch of posts I’m going to share my photos and thoughts about some of the amazingly cool stuff there.

Let’s start off with the aforementioned acoustic guitar used by Jimmy Page used on Stairway. It’s a Harmony Sovereign acoustic guitar that was one of Page’s main songwriting instruments and was used to compose material on the first four Led Zeppelin. It was also used to record most of Led Zeppelin III and the acoustic parts of ‘Stairway To Heaven”. Next to it is the  Danelectro guitar Page had in Celtic tuning (where the guitar is tuned DADGAD) and used on “When the Levee Breaks”, “In My Time of Dying” and “Kashmir”. I love the fact that such important instruments are not top of the line boutique instruments. Both Harmony and Danelectro were primarily budget instrument manufacturers. 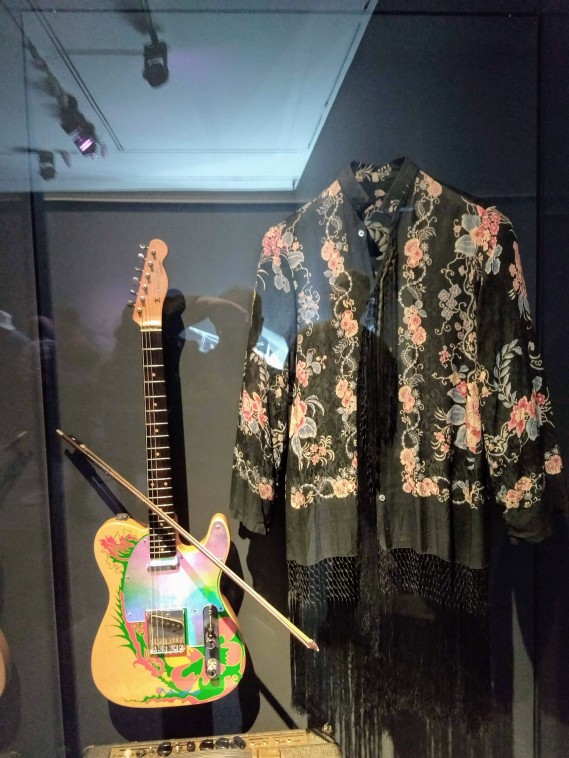 Staying with the Jimmy Page theme, the above photo is of the Fender Telecaster that Page first used while in the Yardbirds. It was given to him in 1967 by Jeff Beck (wow!). Page hand painted the dragon design and replaced the white pickguard with clear acrylic. After the Yardbirds, Page used this guitar to record all of the first Led Zeppelin album (WOW!!).

Talk about iconic. This is the Gibson EDS-1275 Double Neck guitar that Page used to play live on “The Rain Song”, “Celebration Day” and of course, “Stairway To Heaven”. The combination six- and twelve-string guitar allowed Page to play the acoustic and electric parts live without needing to change instruments.

If you live in or near NYC or are going to be in the vicinity between now and October 1, 2019, then you should definitely check out this great exhibit at the Met.

One comment on ““Pictures From An Exhibition . . : The Instruments Of Rock & Roll At The Met Part I”

Leave a Reply to “Pictures From An Exhibition . . : The Instruments Of Rock & Roll At The Met Part II | RoyMusicUSA Cancel reply