The very first jazz musician I ever saw live was Rahsaan Roland Kirk at the Village Vanguard. It was December 1973. I was in high school and just getting into straight ahead jazz, transitioning out of my jazz-rock phase. My brother was home from college and a friend of his was coming into New York. My brother thought it would be cool to check out some jazz with his out of town friend and asked I wanted to go. I had already seen Rahsaan on some PBS show and read articles about him in Downbeat magazine so I didn’t hesitate.

Rahsaan, besides being a brilliant tenor saxophonist, was a showman. To see him live was to witness part jazz concert, part history lesson and part  sermon.  He played multiple horns, flutes and clarinets. He would appear with his tenor sax around his neck along with two obscure saxophones, the srtritch and the manzello (similar to the alto and soprano saxophones respectively). He would often play them simultaneously but not in some gimmicky way. He could truly sound like a one man horn section. 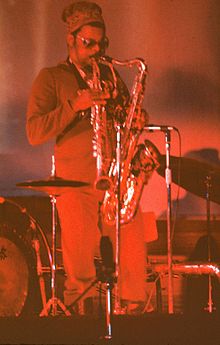 Recorded in June, 1973 at the Keystone Korner in San Francisco, the album Bright Moments is a excellent representation of Rahsaan Roland Kirk live. Originally a double album, it shows the vast range of Rahsaan’s talents. The repertoire goes from Coltrane like modal tunes to Ellington to jazz interpretations of pop tunes to New Orleans. Kirk was displaying a stylistic eclecticism well before it became the post modernistic trend it is today. The record also displayed his astounding ability to play multiple horn simultaneously and his innovative flute playing. Add to this are some select examples of Rahsaan’s “talks” and you can really get a sense of seeing Rahsaan Roland Kirk live.

The first clip (please note that all the clips below are audio only) is the album opener and it immediately shows that Rahsaan was there to kick butts and take names. A modal tune, it showcases the aforementioned multiple horn playing. Yes, that him playing all those horns you’re hearing and it’s live. As amazing as it sounds at first, the real tour de force is the extended solo cadenza Kirk plays on his multiple horns. Amazing. Also take note of the kick ass band that Kirk assembled with Ron Burton on piano, Henry Pearson on bass, Robert Shy drums, Todd Barkin on drums and tambourine ( yes, tambourine) and Joe Texidor percussion.

The next clip features the title cut, Bright Moments. It opens with a Rahsaan in preacher mode. It can sound a little jivey at times but it very much captures a big part of the Rahsaan live experience. The song itself is a feature for Kirk’s flute playing in which he would sing or hum though the flute while playing it. Kirk was a major influence on Jetho Tull’s Ian Anderson (who covered Rahsaan’s Serenade For A Cuckoo on Tull’s first album).

For me, the high point of the record is an absolutely amazing version of the Rodgers & Hammerstein tune If I Loved You from the musical Carousel. This is saxophone ballad playing that so soulful that it will just rip your heart out. You can hear the audience respond as he tears into the melody. Kudos to Ron Burton who follows Kirk’s fire breathing tenor sax with a elegantly cool piano solo that is the perfect contrast to Rahsaan’s fire and brimstone. At the end you hear Rahsaan yell out, “That was mean!”. Yes, it was.

Rahsaan Roland Kirk – If I Loved You


That Rahsaan Roland Kirk guy sounds pretty impressive. Did I mention that he was blind? Amazing. In 1975, Kirk suffered a major stroke which led to partial paralysis of one side of his body. However, he continued to perform and record, modifying his instruments to enable him to play with one arm. I saw him once again at the Village Vanguard after the stroke. Needless to say, he did not display the same intensity as before but he was still playing his heart out. Unfortunately, Rahsaan died after suffering a second stroke in1977.

One comment on “Bright Moments: Rahsaan Roland Kirk Live At the Keystone 1973”