In my previous post, I discussed how one could use octave shapes to learn the notes on the guitar fretboard. I would like to continue by talking about chord shapes. The layout of the fretboard allows you to play a given chord at multiple locations along the guitar neck. By becoming familiar with these interlocking shapes, you will be able to play the chord anywhere on the fretboard. Further more, knowing the role that a given note has in that chord shape will have an invaluable effect on your ability to solo effectively.
When I was first learning chord shapes, I conceptualized it as chords whose roots were on the sixth, fifth and fourth strings respectively. I then realized that the shapes dovetailed together with the notes common to both forms providing a way to mentally link the forms.
Lets start with chord shapes where the root note is on the sixth string (diagrams 1 and 2 below).
Note: All the chord shape examples are assuming an A major chord.

Notice that both shapes share the chord’s root and major fifth (in the case of the A major chord, on the 5th fret). In diagram 1, I put the major fifth that occurs on the second string in parenthesis as a way of showing that it is a note common to both shapes but is usually not played as part of the chord shape (to do so would eliminate the chord’s major third). Also take note of the octave shapes that occur in each chord shapes both within a given shape and between the two interlocking shapes.
The chord shape in diagram 3 below shows an A major chord whose root occurs on the fourth string (here at the 7th fret).

The shapes in diagrams 2 and 3  share the root and fifth of the chord (here at the 7th fret). This shape is rarely played as a chord since it would be very difficult to finger but is still important to know as it provides a link between the chord shape in diagram 2 and the the chord shape in diagram 4 below whose root note occurs on the fifth string. The fourth string root shape also become more useful when it is modified to a seventh chord (more of this next post).

The link between the shapes of diagram 3 and 4 involve the chord’s major third and fifth (here at the 9th fret) as well as the chord root (at the 10th fret). Once again, the notes in parenthesis show that it is common to an adjacent shape but is usually not played. Finally, there is the chord shape in diagram 5 below. 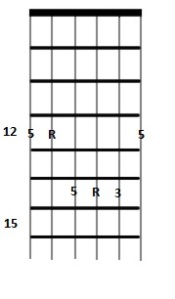 Here, the root and the fifth occurring on the sixth, fifth and first strings are the linking tones with the previous shape. Going further up the guitar neck, we see that this shapes connects to the chord shape of diagram 1 but an octave higher.
So there you have it. By knowing these five shapes and being aware of how they connect together, you can play a major chord over the entire range of the guitar neck. You may notice that if you follow a specific string from one shape to the next up the neck, you will be going up the chord tones of the triad. The root note on the third string in diagram 1 moves up to the major third in the diagram 2 shape which moves up to the chord’s fifth in the diagram 3 shape and so forth. I was first introduced to these concepts when I took a couple of lessons from the jazz guitarist Alan de Mause in the 70’s. He organized these shapes in terms of root note by string. I have noticed that in recent years that a lot of  guitar instructional material organize these forms as the CAGED system. I find that the root by string system works better for me because it gives me a better grasp of the big fretboard picture but that’s my personal preference.
By being aware of what notes are the root, major third and fifth of the chord in a given shapes, you can begin to derive other types of chords. I will get more deeply into this in the next post but as a start, lets talk briefly about how to get minor chord shapes from these major chord shapes.
A major triad chord is made up of the root, third and fifth of a major scale. The minor triad chord is made up of the root, flatted third and fifth of the major scale. How do you flat a third? Just lower the third of a major chord by one fret. As an example, to make the major chord in diagram 5 a minor chord, lower the third that occurs on the second string by on fret (see diagram 6 below).

I hope this makes sense to those kind enough to stick with me this far. I also hope that his helps you begin to get a clearer picture of the guitar fretboard. In my next post, I will discuss expanding these triad chord shapes to major, minor and dominant seventh chords.